"Simply Heaven" who visit this mighty land every year to attain salvation for a life transforming experience.

Nestled in the lap of the Himalayas, Uttarakhand is one of the most beautiful northern states of India that enthralls everyone with its spectacularly scenic landscapes. Charming hill stations juxtaposed against snow-capped peaks, quaint villages along winding mountain roads, serpentine rivers carving their way through hills, world renowned conservation parks like ‘Jim Corbett Tiger National Park’ and ‘Asan Wetland Conservation Reserve’, world heritage sites like ‘Valley of Flowers’ and ‘Nanda Devi Biosphere Reserve’, waterfalls hurtling down slopes and serene lakes shimmering amidst beautiful towns- that's Uttarakhand for you.

The city has a very rich and 5000 year's old history that starts with the arrival of the Pandavas. The city is also a witness of the different wars particularly the Indian war of independence. It was made the capital of the nation by the Britishers.Planned by Vidyadhar Bhattacharya, Jaipur holds the distinction of being the first planned city of India.Renowned globally for its coloured gems, the capital city of Rajasthan combines the allure of its ancient history with all the advantages of a metropolis. The bustling modern city is one of the three corners of the golden triangle that includes Delhi, Agra and Jaipur.

In Sanskrit, Haridwar stands for Dwara of Hari or Gateway to God, where 'Hari' means God and 'dwar' means gate. Haridwar serves as the Gateway to the Char Dhams of Uttarakhand and one of the seven holiest places to Hindus. The River Ganges, after flowing for 253 kilometres (157 miles) from its source at Gaumukh at the edge of the Gangotri Glacier, enters the Indo-Gangetic Plains of North India for the first time at Haridwar, which gave the city its ancient name, Gangadwára.

The 'Panch Tirth' or the five pilgrimages located within the periphery of Haridwar are Gangadwara (Har Ki Pauri), Kushwart (Ghat), Kankhal, Bilwa Tirtha (Mansa Devi Temple) and Neel Parvat (Chandi Devi). A paradise for nature-lovers, It is also a point of entry to Dev Bhoomi and Char Dham (Four main centers of pilgrimage in Uttarakhand Viz. Badrinath, Kedarnath, Gangotri and Yamunotri).

Haridwar is one of the first towns where Ganga emerges from the mountains to touch the plains. And that's why the water is crystal clear and cool. The legendary King, Bhagirath, the great-grandson of the Suryavanshi King Sagar (an ancestor of Rama), is said to have brought the river Ganges down from heaven, through years of penance in Satya Yuga, for the salvation of 60,000 of his ancestors from the curse of the saint Kapila, a tradition continued by thousands of devout Hindus, who brings the ashes of their departed family members, in hope of their salvation. Lord Vishnu is said to have left his footprint on the stone that is set in the upper wall of Har-Ki-Pauri, where the Holy Ganges touches it at all times

Haridwar is also one of the four places; where Kumbh Mela occurs after rotation of every twelve years and Ardh Kumbh after every six years. It is said that drops of Amrit (Elixir) fell in to the Brahmkund of Har-Ki-Pauri, therefore it is believed that a dip in the Brahmakund on this particular day, which is very auspicious and happens when Jupiter (Brihaspati) meets Aquarius (Kumbh). Kumbh, 1998 was the last Maha Kumbh of this century.

Haridwar has a long standing position as a great source for Ayurvedic medicines and herbal remedies as well as its unique Gurukul school system of traditional education, the scenic beauty and lush greenery...they all give the city unique flavors and charm.

Taking a Dip in Ganga

A dip in Ganga river does remove all the sins when it is done with shraddha (repentance) and with pure heart, believed as destroyer of sins & cleanses our body & mind. Ancient Rishis found that the Ganga carried in her waters phenomenal powers to restore and rejuvenate atma-shakthi to one who is in a weakened state. A revitalized atma- shakthi would in turn revitalize the weakened and sick mind, intellect and body which are the fall-out of weak atma- shakthi. A renewed mind and body will help the Paapi to have the strength to choose the right action 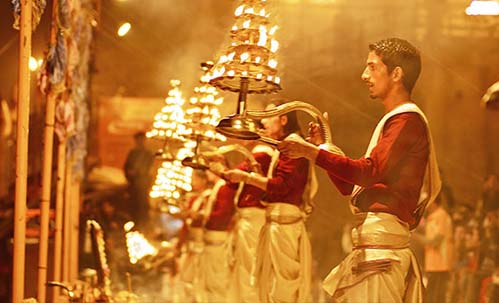 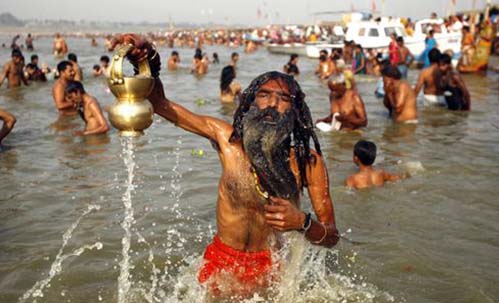 Monuments to witness in Uttarakhand:


Places to Visit in Haridwar with Short Descriptions: 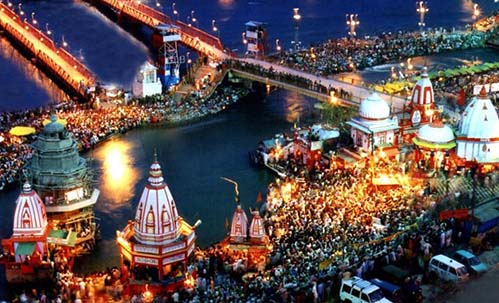 This sacred Ghat was constructed by King Vikramaditya (1st century BC) in memory of his brother Bhrithari after his death who use to meditate on the banks of Ganges, later known as Har-Ki-Pauri also known as Brahmakund and mythology suggests that Lord Shiva and Lord Vishnu had visited it during the Vedic times. A temple is built around a large foot mark which is believed to be the imprints of Lord Vishnu. The evening prayer(Aarti) at dusk offered to Goddess Ganga at Har-Ki-Pauri. A spectacle of sound and colour is seen when, after the ceremony, pilgrims float diyas (floral floats with lamps) and incense on the river, commemorating their deceased ancestors. Thousands of people from all round the world do make a point to attend this prayer on their visit to Haridwar. 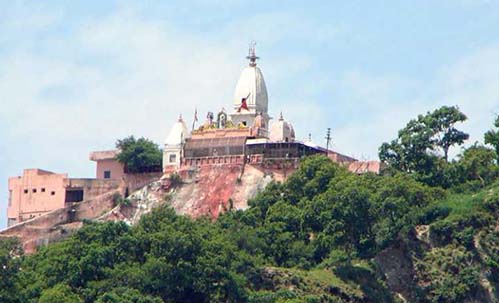 A standout amongst the most visited temples in Haridwar, Mansa Devi Mandir is situated on top of the Shivalik slopes. This temple is devoted to Goddess Mansa Devi, who is believed to satisfy the wishes of the individuals who visit here. It is a convention among lovers, that they tie sacred strings around the tree that stands inside the premises of the Mansa Devi shrine. Alongside the Chandi Devi and the Maya Devi shrines, Mansa Devi temple completes the Siddhapeeth Triangle. 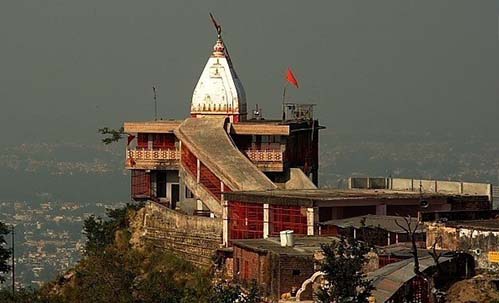 Chandi Devi Temple, located on the top of Neel Parvat, is one of the major tourist attractions and is a sign of devotion to Goddess Chandi. It is also a major religious site of this town. It is around 3 kms from Chandighat and It is one of the Siddhapeeth. The main temple is situated on top of the Hill peak.Chandi Devi is of great religious importance and is also considered as one of the Shakti peethas of North India. This temple is also known as Siddh peetha, as it is believed to have powers that can fulfill the wishes of the devotees. 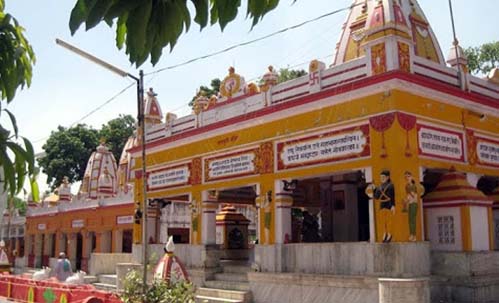 Devoted to goddess Maya Devi, the sanctuary is a noteworthy fascination for all guests that come to Haridwar. The temple is considered to be one of the Shakti peethas in India. As per the Hindu mythology, it is the spot where the heart and navel of goddess Sati tumbled down, while Lord Shiva was conveying her smoldered body. Various celebrations are held at the Maya Devi sanctuary, keeping in line with the traditions and customs. 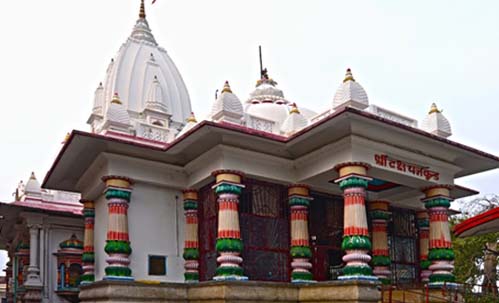 This temple is located towards the south of Kankhal town in Haridwar which was built by Rani Dhankaur in 1810 A.D. . The Daksha Mahadev Temple is the site where Daksha performed a Yagna (a Hindu custom to conjure divine beings and look for their gifts).In the Hindu mythology, Daksha Prajapati is the father of Sati, the life partner of Lord Shiva. The sanctuary is only short drive away from the railway station.

Rishikesh, a most tranquil place in northern Uttarakhand, surrounded by hills and bisected by the wide and sluggish Ganges, is often claimed as the `Yoga Capital of the World'. Back in the 1960s Rishikesh gained instant fame as the site where The Beatles came to stay with their guru, the Maharishi Mahesh Yogi. It is an excellent place to meditate and study yoga. Rishikesh is also a good starting Laxman Jhula point for treks to Himalayan pilgrimage centres such as Badrinath, Kedarnath , Gangotri, Yamnotri.It is rightly called the gateway to the Himalayan Shrines of Badrinath, Kedarnath, Gangotri and Yamunotri. 7 Story Temple Situated 24 km upstream from Haridwar, at the confluence of the Chandrabhaga and Ganga.

Rishikesh has long been a spiritual centre. It is said that the sage Raibhya Rishi did severe penance here and as a reward, God appeared to him in the form of Hrishikesh, hence the name. Rishikesh has numerous ashrams, some of which are internationally recognized as centers of philosophical studies, yoga and meditation. An international yoga week is organized here every year by Uttarakhand Tourism between 2nd and 7th of February. For the adventurous, there are opportunities for white water rafting on the Ganga. The climate here is continental type but its location in the foot hills gives it a pleasant weather throughout the year. One can visit Rishikesh any time of the year.

Places to Visit in Rishikesh with Short Descriptions: 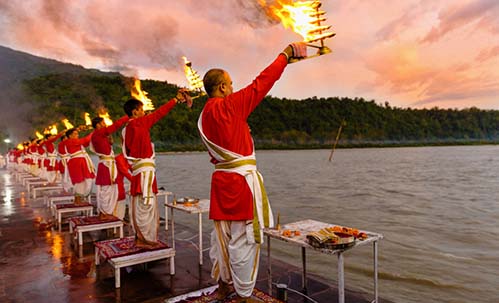 Triveni Ghat is situated at the confluence of three holy rivers – Ganges, Yamuna and Saraswati. As per Hindu Epics and Puranas, this place was visited by Lord Krishna when he got hurt by the arrow of a hunter. The site holds great spiritual relevance and is frequented by countless devotees every year. It is believed that people who take a bath here will get rid of all their sins and achieve salvation.

Since early morning, pilgrims offer prayers to the holy river and feed the fish in the ghat. Triveni Ghat is popular for its evening aarti, during when one can completely immerse in the spiritual ambience. Hundreds of lamps floating on the river give a splendid vista. A magnificent idol of Lord Shiva stands tall here and is an awe-inspiring sight during monsoons, when it is half col-lg-12merged in water. The famous Lakshminarayan Temple and Gita Mandir are situated on the banks of Triveni Ghat. The spot also has a market that sells spiritual books, idols of deities, gemstones, puja items, religious CDs and tapes. To experience pure spiritual rejuvenation, there simply cannot be a place better than Triveni the Ghat. 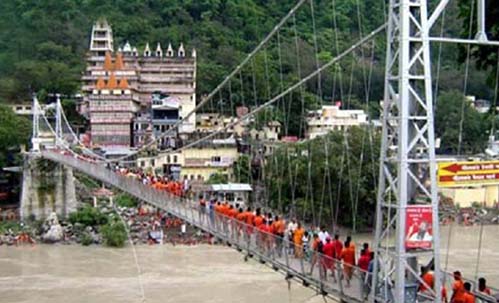 Lakshman Jhula is a famous hanging bridge across the river Ganga that connects two villages, Tapovan & Jonk. The entire bridge is made up of iron, is 450 feet long and is situated at the height of 70 feet from the river. It is widely believed that Lakshman, the brother of Lord Rama, had once crossed the river with the help of a jute-rope bridge on the same spot. Grand temples and famous markets have sprung up in the vicinity, and the entire area is a now a particularly renowned attraction in entire Rishikesh. Important places around the Lakshman Jhula include the Terah Manzil temple, the Lakshman temple, and the Ram Jhula. The entire area is imbued with a mystic, serene and holy feeling to it. 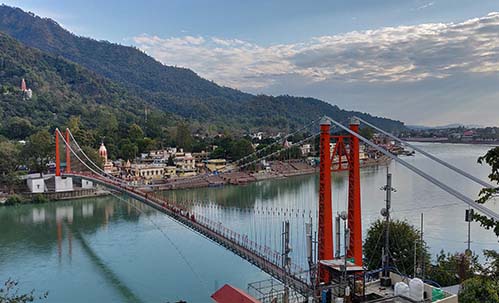 Ram Jhula is situated 3 Km north of Rishikesh, An iron suspension bridge spans 750 feet and is a splendid work of engineering that connects the religious Shivananda Ashram and Sawargashram ashram situated on both sides of the river and offers a splendid bird's eye view of the mighty Ganges and the serene nature at the foothills of the Himalaya, landmark of Rishikesh. The fresh air and sound of flowing water, the scenic beauty of the region can be seen from the bridge.

Trimbakeshwar Temple or Tera Manzil Temple is the thirteen storey temple situated on the banks of river Ganges in Rishikesh. Located right opposite the Lakshman Jhula, the temple enshrine several deities under one roof. Popular for its striking architecture, the temple also offers panoramic landscape view from the top of its 13th floor. 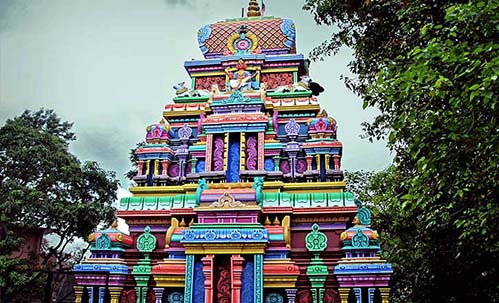 Neelkanth Mahadev Temple is situated on the outskirts of Rishikesh, around 12 km away, is a revered temple, known as ‘Nilkanth Mahadeo’. Perched on top of a hill, at a height of around 1675 m, the temple is dedicated to Lord Shiva. Legends say that the venom that oozed out while the ‘Samudra Manthan’ was ingested by Lord Shiva at the place which is now known as the Nilkanth Mahadeo.